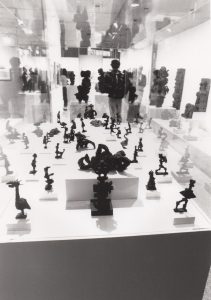 The Borgenicht Gallery will be exhibiting bronze sculpture by Reuben Kadish. These small, figurative works by Kadish are boldly expressionistic in form and surface, and convey a sense of sensual immediacy. Kadish’s artistic vision was influenced by Aztec sculpture and his travels in India, as well as an interest in ancient Greek and Egyptian mythology. His interest in myth and archaic imagery is utilized in his own sculpture to evoke the relationship of man to nature and the earth. Kadish studied in Los Angeles in the early 1930’s, where he became the assistant to the Mexican muralist Alfaro Siqueiros, developed a close friendship with Philip Guston, and later executed a mural for the W.P.A. In the 1940’s he moved to New York, where he was friendly with Jackson Pollock and other artists from the New York School. Kadish has shown at the Borgenicht Gallery since the mid 1970’s, and was an influential teacher at Cooper Union up until his recent death in September, 1992.