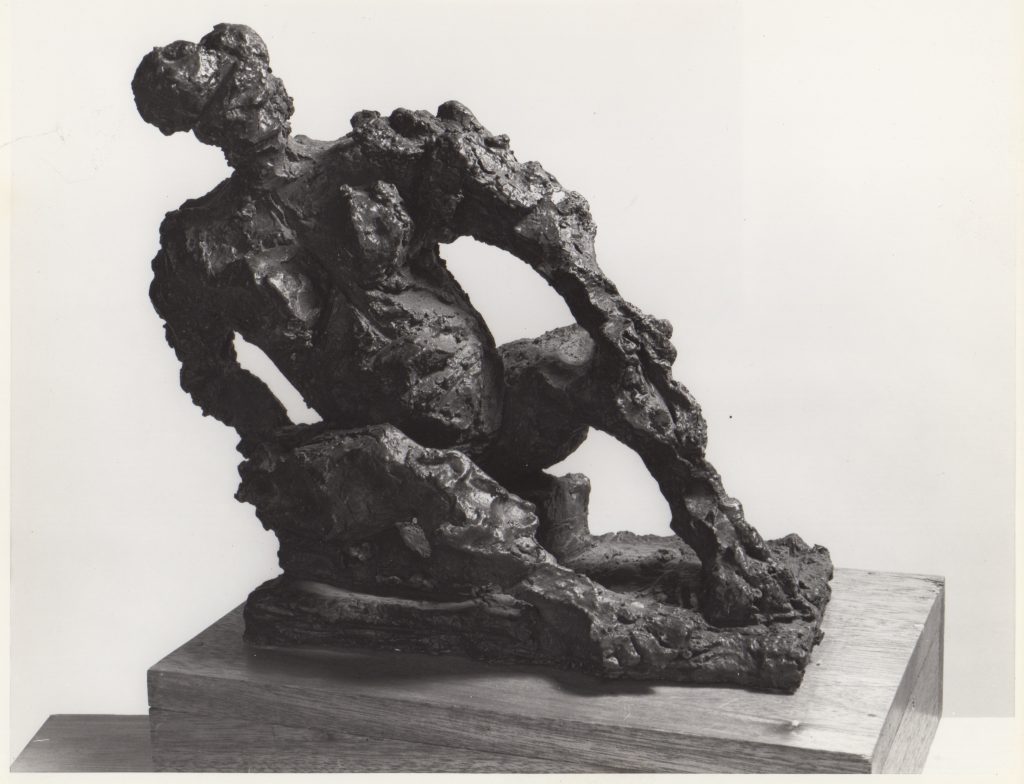 Clay, common clay, is when it all begins for Reuben Kadish. New York based, Chicago born sculptor, who is showing at the Grace Borgenicht Gallery. “There is a mythic feeling about clay,” remarks Kadish. “No God over created without it.”

What Kadish creates in this pliable. responsive medium, and then casts In bronze to endow with presence and endurance, is woman. Woman standing, Sitting, reclining, perched. relaxed, recumbent Always alone. Always commanding her own space. At ease amid tension. Unengaged. Unoccupied. Rich. voluptuous, surging with her woman-ness. Two breasts are not always enough: two thighs do not always suffice. Accordingly. Kadish sometimes bestows three breasts. four. On the other hand, one head is sometimes in excess. Oil with it then, and crown her with a duality of breasts.

If raised consciousness in the often produces raised eyebrows at this point, be assured there is no cause for censure. These are queens. great goddesses, earth mothers, twist.) progenitors of endless dynasties. The specifics of their anatomy are irrelevant in the aura of their power. Even the small pieces, a mere 18 inches or so, pulsate with that Power. The larger terracotta reliefs, our goddesses of pre-history larger and more exuberant than life, twisted, pounded, extended, hacked at. In-fated—proclaim the tenacity and everlastingness of woman both as female and deity.

To call these figures nudes. although in literal fact they are undressed. is a total absurdity. All are densely clothed in the folds. overlaps, ridges, extensions, ribbings, outcroppings, concavities, protrusions, snow twines, and balloonings of their own flesh. Yet the massive scarification conjures up neither suffering nor assault. It is the inner energy that upheaves through the tortured surface, the imprisoned force within seeking to escape through the lava-coated body slopes.

Kadish has worked with wax in the past but felt he didn’t got what he wanted out of this perhaps too malleable medium. Now he uses a commercial clay and fires large pieces sectionally. The intent is to start with clay as a springboard and then proceed to bronze. In the procession Kadish recognizes that he loses detail, but gains density. The idea that bronze is impenetrable is important to me.” he says. “Brancusi understood this.”

Kadish begins a piece with an impress on the clay and notes the response. He goes on from there. Impelled perhaps by a book ho has road, a phrase he has recalled from Cocteau, a walk down the street, a kiss. One of his sealed figures, rich in breasts but armless, emerged alter he had read three volumes on the Byzantine Empire. Here the dominant message is one of timelessness, of rise and fall, of tenderness and fertility enduring beyond the vanished glories.

Kadish currently teaches at Cooper Union College of Art He has had eight one-man shows. appeared in several dozen group exhibitions, and is represented in the collections of The Museum of Modern Art the San Francisco Museum of Art, several university museums, and the Pentagon Museum in Washington, D.C. It may be that Kadish’s women have a few things to tell the Pentagon. (November 13th to December 10th – Grace Borgenicht Gallery)