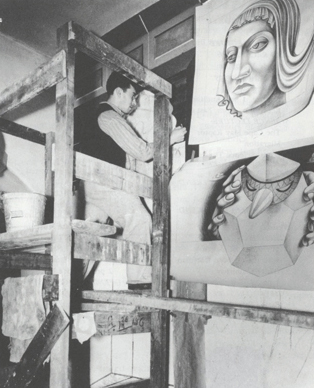 Kadish working on a mural at San Francisco State College, 1936-37

Reuben Kadish, Works from 1930 to the Present opens on February 3. as the second exhibition of our series. Contemporary Arts: The New Jersey Context.

This retrospective of six decides of works by this first-generation Abstract Expressionist sculptor provides an in depth examination into the gestation and the growth of the Abstract Expressionist movement. An accumulation of history and experience permeates these works. A palpable expressionism is evident throughout his career — in the works from the 30s informed by his apprenticeship with David Alfaro Siqueiros and study with Lorser Feitelson to his most recent series of sculpture motivated by our many holocausts.Concerns with the visceral and anguished side of life are realized through the brutal sensuality of this imagery. Memorials to history’s anonymous victims are imbued with a depth of emotional intensity.

Reuben Kadish was born in 1913. As a youth in California, Radish’s involvement with the indigenous and the non-Western began with his exposure to Eastern philosophies. This interest developed during his time spent executing a mural at the Univerisity of Michoacan in Mexico, and was integrated into his mural proposals for the WPA Federal Art Project in San Francisco. His service to the country as a member of the Army Artist Unit in 1943 and 1944 furthered his interest in humanity’s conflicts. Documenting the war in India and Burma deepened his respect for the Eastern culture. Spiritual references, formed by this experience, thus were integrated into his expressionistic works of the 1940s and 1950s and created the basis for statements with an underlying emotional, intellectual and spiritual wealth. The spirituality that imbued the life and an of India coupled with the devastation caused by the atom bomb merged to inform his life’s work. 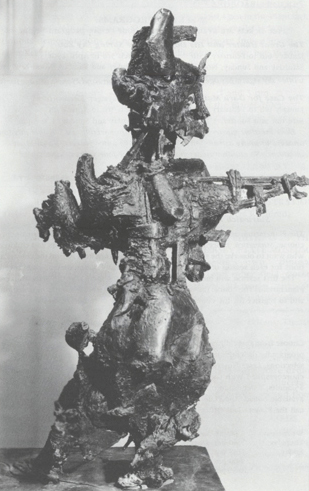 Upon his return from World War II. Reuben and Barbara Kadish moved to New York City, prior to their eventual move several years later to a farm in Vernon, New Jersey. Removed from the center of the New York Art world, arduously dairy farming for ten years allowed Kadish the time to evolve and renew his involvement in the art world not as a painter but as a sculptor. A farmer’s involvement with birth and death and with the harshness of the natural world solidified his concerns with the visceral and the brutal established during his war service. The symbolic and the intellectual remove of his imagery from the 30’s acquired a sensual and explosive force. His
works were infused with fervor and immediacy. The woman, a recurring image. is presented as a symbol for fertility and power, a force of torment and elation. These are probing statements imbued with an understanding of human frailty.

On view through April 15. this exhibition will present several hundred works ranging from his early draw-ing and paintings to the more recent terra cotta and bronze sculpture. A catalogue of the exhibition with forewords by the exhibition curator. Alison Weld, and Herman Cherry, a first generation Abstract Expressionist painter, will be available from the Fine An Bureau. A reception, open to the public, will he held on Sunday. February 4 from 3 to 5 pm.