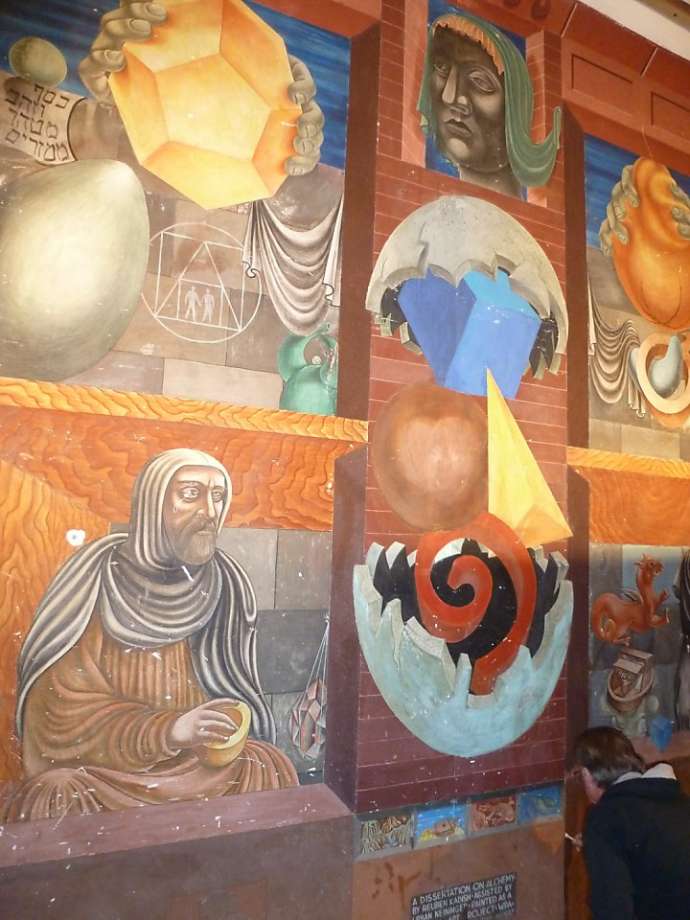 With the imminent demolition of a UC Berkeley Extension complex, a significant and long-endangered Depression-era mural in San Francisco – prized by preservationists and art historians but out of public view for a decade – appears to have been saved.

Barring any hitch in the permit process, demolition of the 55 Laguna complex is expected to begin in a matter of weeks, leading to its replacement with 440 dwelling units: 330 market rate and 110 affordable, intended for seniors. The Kadish mural is in what will be the market rate housing area, originally the Woods Hall annex, which will also incorporate a new community arts center.

ORIGINS OF A MURAL

Kadish (1913-1992), who grew up in Los Angeles, where he studied art – counting among his friends Jackson Pollock and Philip Guston – produced the allegorical fresco under the auspices of the Works Progress Administration. He subsequently headed the WPA’s Federal Art Project in Northern California, complaining in retrospect that the agency cared more about paperwork than artwork.

“Kadish was a very fine artist, and ‘Dissertation on Alchemy’ is a most remarkable New Deal mural,” UC Berkeley historian Gray Brechin said in an e-mail. “What impresses me about Kadish’s fresco in the old WPA-built science wing is how teasingly arcane its imagery is. … Kadish left a haunting visual puzzle in the staircase, which is perhaps appropriate for the subject of alchemy, as well as for students who were probing the secrets of nature themselves.”

In addition to its entombment in a disused building, “A Dissertation on Alchemy” suffered defacement by graffiti, possibly at the hands of squatters who have managed to shelter in the complex at times. UC hired Bay Area art conservator Anne Rosenthal to assess and correct the damage in a preliminary way.

When she examined the Kadish mural in December, Rosenthal said in an e-mail, “the fresco had been vandalized, mostly by spray paints.” Other problems included “scratches and water damage, and a history of old repair. All these need attention in the future.”

As an immediate fix, “I removed as much as possible the many kinds of paint, ink, and chalk graffiti applied by vandals,” Rosenthal said. “The treatment was very successful, but some of it does remain: This will be further corrected as possible in a later conservation treatment. Fresco paintings are porous by nature, as they are painted on plaster. Some unavoidable traces of entrapped graffiti exist in the pores of the plaster.” 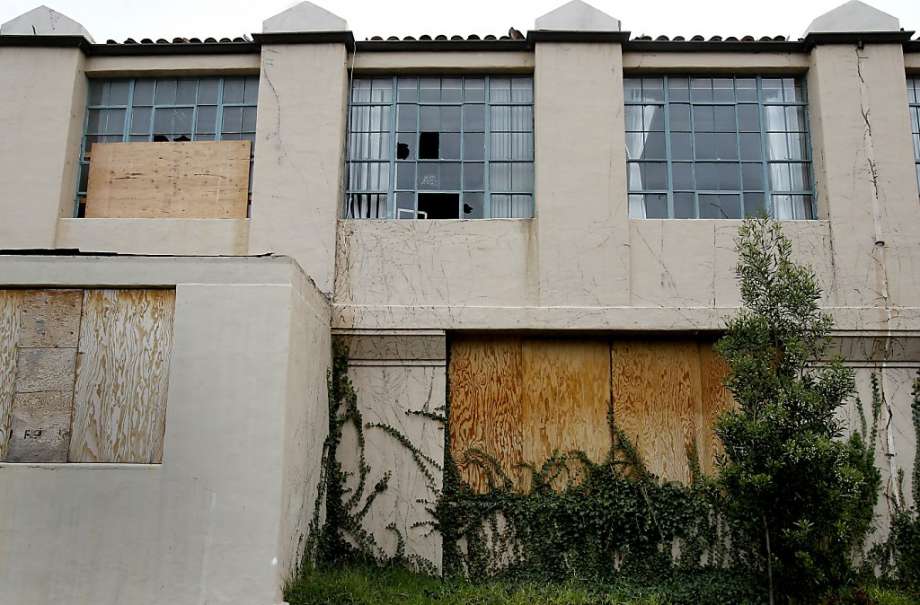 In a 1992 interview for the Archives of American Art, Kadish recalled the conservatism of San Francisco committee men, led by architect Timothy Pflueger, who had to sign off on his mural proposals.

“I did 20-odd designs for murals, and only one of them was accepted,” said Kadish who, along with Guston, apprenticed to the celebrated Mexican muralist David Alfaro Siqueiros.

“They were too flamboyant, too revolutionary, too this, too that. … I did a design for San Francisco State College and it had to do with the first atom-smasher, the Lawrence Lab, across the bay – well, it was a vigorous, energetic thing, and it was too wild as far as they were concerned. So he gave it to someone else to redesign, so that watered it down and made a little piece of nice mishmash out of it.”

There are other murals and mosaics within the complex that UC Berkeley took over in 1958 to serve as an extension for adult and continuing education programs. Site-specific works by less remembered artists such as Hebe Daum and Maxine Albro will also be restored.

In 2003, the university, which retains ownership of the 5.8-acre property, deemed the seismic retrofit and maintenance the building needed impractically expensive. Wood Partners, with headquarters in Marin, bought the rights in 2010 to negotiate a long-term lease with the university – 75 years for the market rate side, 99 years for the senior housing portion – after the original developer, A. F. Evans, went bankrupt.

Tovey Giezentanner, the development project’s community liaison, estimates that the market rate side will take 24 to 27 months to complete, with the affordable segment about a year behind that, because a combination of federal, city and private funding will pay for it.

The developer is contractually bound to secure the Kadish mural during the course of the project. And “conservation treatment is typically the last piece of work following construction,” Rosenthal said.

So anyone who wants to see “A Dissertation on Alchemy” in anything like the state Kadish intended still has a long wait ahead.